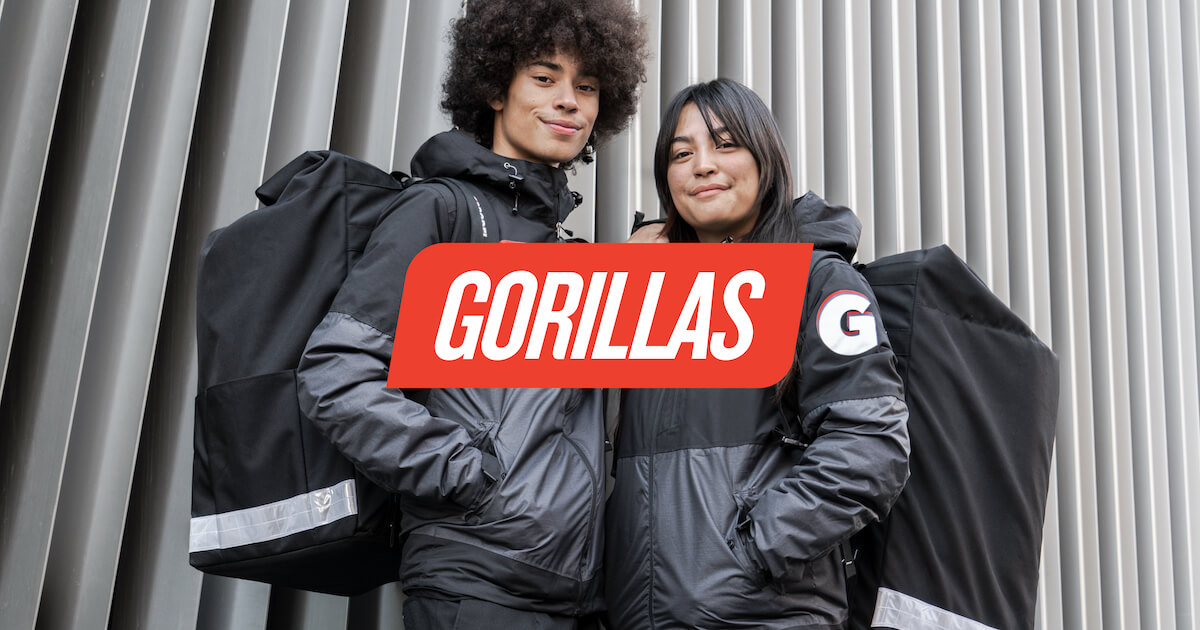 Gorillas is a well-loved international on-demand grocery delivery company that delivers high quality goods within 10 minutes of ordering, servicing a range of international cities across Europe and the US. It has built an effective and reliable ecosystem in the cities it operates, utilizing local produce while still providing users’ most-loved supermarket favorites.

Gorillas are often hiring for a range of roles to grow their business, and Candidate Experience is a top priority for them due to their globally recognized name. As they continue the quest for becoming champions within their markets, they recognize that this ties to their recruitment, as they need to hire good people.

​​Kateryna is driving forward their mission, focusing on two key areas; hearing the candidates out, as well as ensuring that the data collected is being turned into actions. She wanted to find a way to automate capturing Candidate Experience feedback, visualize it, and subsequently improve it.

There are 3 key areas that Gorillas wanted Starred to address:

First and foremost, Gorillas wanted to focus on the people element. Their candidates are 100% human and the recruitment process should have a human-centric approach to live true to their values. Gorillas candidates are also their customers, meaning if candidates have a poor experience, they could potentially no longer use Gorillas as a consumer.

“I always say hiring is the core because 100% of all customers are people, and 100% of people are potential candidates. You need to focus on them first”

Gorillas wanted to have a transparent data overview that would reflect the candidate experience status globally, providing them with clear and tangible insights into the overall experience for their candidates. This would enable them to see if there are urgent improvements that need to be made from their candidate’s perspective.

At Gorillas, they care a lot about their unique and customer-centric brand as their brand is constantly viewed across markets by potential customers and candidates.

The Gorillas team wanted to ensure that the brand was protected, as well as being transmitted into the global candidate experience, providing potential employees with a taste of what Gorillas is like as a company. One of the key areas was ensuring that people didn’t view Gorillas as a brand that is robotic, or that they didn’t care for their candidates’ wellbeing.

How Starred solved the challenge:

While looking for a solution, Gorillas wanted to ensure that they could solve all of their Candidate Experience woes in one space. Starred was the right solution for Gorillas due to the full customization, data visualization, access levels, and a simple, no-code integration with their ATS.

Since implementing Starred, Gorillas have seen a range of results that have helped better shape their candidate journey. But most importantly, Starred was able to address the original challenges they faced.

With Starred, Gorillas were able to:

Working hand-in-hand towards implementation with the Starred Customer Success team, Gorillas have been able to fully customize their own Starred surveys, covering all stages of the recruitment process and drilling down into the areas they want to uncover insights in. By being able to leverage Starred’s native ATS integration, using Starred Connect, Gorillas have been able to automate the delivery of their fully-branded and customizable surveys to candidates.

Candidate Experience data is collected on auto-pilot, allowing Gorillas to visualize their candidate data at scale.

Starred does this by listening to actions taken in Gorillas’ ATS. Gorillas uses Starred to measure 6 different touchpoints of their recruitment process, listed here:

“Starred is saving me because it captures the data from our Applicant Tracking System and I can actually see and identify any data issues from the software.”

Gorillas are now able to capture Candidate Experience data at scale, and have a complete and accessible data overview, all in one place. By using Starred, Gorillas are able to:

“The Priority Matrix is a lifesaver. It shows you right away what you need to focus on.”

Gorillas has been able to inform the wider business on a range of Candidate Experience and Talent Acquisition angles using the fully bespoke dashboards. These let them dive into granular details of how candidates feel, and easily share the results with stakeholders. Since implementing Starred, they’ve been able to:

Hear the Candidates out

“Starred are our ears for candidates at Gorillas”

Starred is Gorillas’ open ears for candidates, providing an immediate bridge between candidates and Gorillas. Utilizing Starred allows Gorillas to get an insight into how their candidates feel, so that they can make changes based off of this, for example like how they revamped their candidate communication.

Gorillas have many touch points with candidates during the process, to make sure they are keeping in touch with them at all stages. The insights from Starred allowed Gorillas to revamp their communications with candidates to ensure they’re on brand, effective and always human-centric.

Gorillas captures qualitative feedback, and then subsequently translates the comments into concrete action points. This is done by labeling each comment into key themes. Now even qualitative feedback is easily identified and strengths and weaknesses in the hiring process can be discovered in data that can otherwise easily get lost.

This provides Gorillas with a complete picture of how their candidates feel, piecing together both quantitative feedback as well as qualitative feedback.

If you want to find out how Starred can help you uncover hidden insights from your candidates, feel free to reach out to us below or via the chat.

Want to learn more about how you can level-up Candidate Experience?

Get a personalized product tour from our team.

Booked in seconds
Get a demo